As we commemorate the 100th Anniversary of the Great War,  we remember those from Washington State who fought with allied forces.

More than four million American families sent their sons and daughters to serve in uniform during the Great War.

More than 350,000 African Americans served in the U.S. military, as did Native Americans and members of other minority groups. And, for the first time, women joined the ranks of the U.S. armed forces. 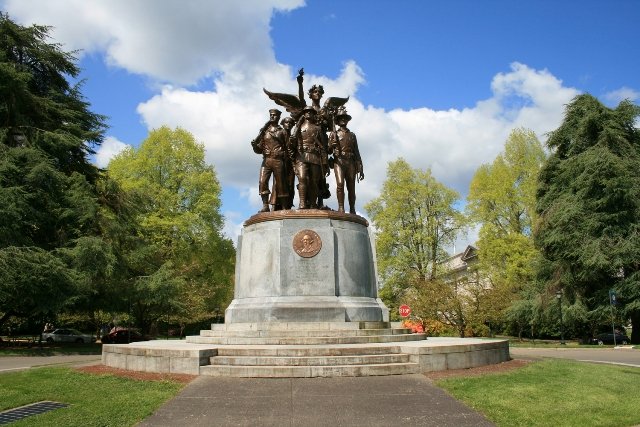 The winged victory monument on Capitol Campus, honoring those who served in World War I, was first conceived in 1919. Plans were approved in 1927, soon after completion of the main buildings of  Capitol Campus. It was designed by noted sculptor Alonzo Victor Lewis. The monument was dedicated in 1938. The central figure represents the Greek goddess Nike, or Victory, flanked by members of the then-three armed forces: sailor, soldier, and marine, along with a Red Cross nurse.

Listed below are a few of the World War I memorials in Washington.

• Spirit of the American Doughboy – Centralia

In Flanders Fields
by John McCrae, May 1915

In Flanders fields the poppies blow
Between the crosses, row on row,
That mark our place; and in the sky
The larks, still bravely singing, fly
Scarce heard amid the guns below.

We are the Dead. Short days ago
We lived, felt dawn, saw sunset glow,
Loved and were loved, and now we lie
In Flanders fields.

Take up our quarrel with the foe:
To you from failing hands we throw
The torch; be yours to hold it high.
If ye break faith with us who die
We shall not sleep, though poppies grow
In Flanders fields.