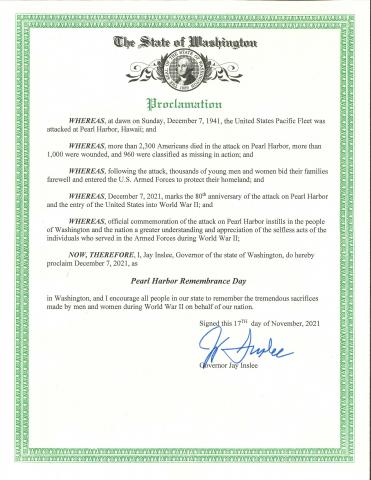 WHEREAS, at dawn on Sunday, December 7, 1941, the United States Pacific Fleet was attacked at Pearl Harbor, Hawaii; and
WHEREAS, more than 2,300 Americans died in the attack on Pearl Harbor, more than 1,000 were wounded, and 960 were classified as missing in action; and
WHEREAS, following the attack, thousands of young men and women bid their families farewell and entered the U.S. Armed Forces to protect their homeland; and
WHEREAS, December 7, 2021 , marks the 80th anniversary of the attack on Pearl Harbor and the entry of the United States into World War II; and
WHEREAS, official commemoration of the attack on Pearl Harbor instills in the people of Washington and the nation a greater understanding and appreciation of the selfless acts of the
individuals who served in the Armed Forces during World War II;
NOW, THEREFORE, I, Jay Inslee, Governor of the state of Washington, do hereby proclaim December 7, 2021 , as
Pearl Harbor Remembrance Day
in Washington, and I encourage all people in our state to remember the tremendous sacrifices made by men and women during World War II on behalf of our nation.
Signed this 17TH day of November, 2021